Help Eltham Hill School encourage the next generation of gardeners 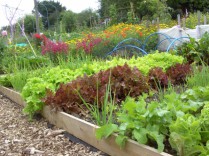 Following another very succesful open garden event at Mike Hill's house on Eltham Hill the society have bought another heavy duty wheelbarrow for Pippenhall to add to the 3 that were acquired a year ago. We have also started to replace the padlocks on those lockers that were broken into earlier this year, and have plans to decorate the tidy up the mens and ladies toilets which have not seen a paint brush for many a year!

As discussed previously we are also looking at the possibility of acquiring a heavy duty 4 stroke petrol brush cutter/line strimmer for use by plotholders and for general site maintenance now that the council have reduced the scope and frequency of their site maintenance visits due to budget restrictions.

We are pleased to announce that Clive Efford, the Member of Parliament for Eltham, and Shadow Transport Minister has accepted our invitation to present the prizes at our Annual Show, which will be held on Saturday 14th September at St. Mary's primary school, Glenure Road, Eltham. The show opens to the public at 3pm and prize giving will commence at 4.15pm. Clive used to be a tenant at Pippenhall allotments so will be a familiar face to many members.

The society held it's AGM on Thursday 21st March in the church hall at Holy Trinity church in Southend Cresent, Eltham. It was good to see both long term, new and prospective members, including several who previously supported the now sadly defunct New Eltham Horticultural Society. Apologies for absence were received from a number of members who were not able to attend, Joy Alker, Stephanie Comis, Joyce Snipp and Elizabeth Walker.

The agenda was in the usual format and Mike Hill the treasurer reported that our income had risen for the second year running, the annual show had again made a profit, and his Diamond Jubilee open garden event had made a large contribution to society funds. He also reported that the shop had made a loss in 2012 but this was down to writing off of stock, mainly chemical products which are now banned from sale and the purchase of much new stock. The joint trading secretaries, Pat and David Middleton, urged members, their friends and neighbours to take advantage of our low prices for their garden supplies this year.

Mike Hill and Graham Farrant spoke about the annual show which this year will take place on the 14th September. Mike asked for suggestions for new classes, particularly in the domestic classes which had seen an increase of entries, no doubt caused by the surge in interest in home baking in recent years. Graham said that judges for the show had already been booked to avoid a repetition of last year.

Roger Brown, membership secretary, reported a similar number of members had renewed their mebership compared to the previous two years, and that we hoped to gain some members from the closure of NEHS.

Elections were then next on the Agenda and Charles Strangwige, our Chairman, President and founder member for 61 years announced that he would be standing down. All other officers and committee members indicated they were happy to stand once again.

Graham Farrant was elected Allotments Liaison Officer as he was now the rep for Pippenhall and he also sits on the Greenwich Borough Allotments Forum.

The vacant post of Chairperson was the filled by Samantha McKerrell, a previous trading secretary, and new members of the committee were then proposed and seconded, Barbara Crowe, who helps man the shop at Pippenhall, and Jane Barnes, a new member from New Eltham HS. Welcome to all of you. We were particularly pleased to have gained two new committee members, and to have a female Chairperson for the first time in the Society's history.

Before the meeting closed Charles urged the membership to get involved with society business to make sure that it represented the views of as many members as possible and enabled it to thrive for many years to come. Graham then thanked Charles on behalf of everyone in the society for his 61 years of service, and although wishing him a happy retirement from EAHGS, hoped that he would keep in touch.

The raffle organised by Gordon Mole was then drawn and finally the meeting closed at 8.40pm and refreshments were served by Margaret Mattinson and Barbara Crowe, and our thanks go to them.

The committee of EAHGS have been made aware that the New Eltham Horticultural Society have now voted at their AGM held on the 4th March 2013 to close the society and sell off their shop stock as no-one volunteered to assist running the society or shop in future.

It is always sad when a long established society ceases to exist but we know the pressures only too well. EAHGS would like to invite all NEHS members to join our society, take advantage of our shop at Pippenhall allotments and to exhibit at our 61st Annual Show on Saturday 14th September 2013. You will be made most welcome. If you would like to join or get more information about EAHGS please contact us by clicking here

Break in at Pippenhall 16th January

We were advised on the morning of the 17th January by several plotholders that at some point during the previous night the site was broken into. One of the 'temporary metal fencing panels to the right of the shop were pushed over and access was gained to the site.

The tool store in the main building was broken into by forcing the lock on the door and the lockers on the right hand side (numbers 21 to 28) were also targeted. It would then appear the thief or thieves went on to force the doors on most of the sheds on site apart from those that are directly overlooked by the flats in Lemonwell Drive.

The police and council have been informed but if you have suffered any loss or damage to your property it is important to report it to Eltham Police.

The council have repaired the fencing and they also arranged for a locksmith to visit the site this afternoon to make good the door and lock to the tool store.

The 61st annual show has now been confirmed for Saturday the 14th September 2013 at our usual venue, St. Mary's school in Eltham. Keep checking the show page for more details.

The solar powered battery storage system with the latest LED lighting has now been installed inside the shop to make the shop more welcoming whilst having a minimum impact on the environment.

Thanks to David Middleton, Mike Hill and Graham Farrant for organising and installing it.

At the committee meeting held on the 14th August 2012 it was unanimously agreed that the society would purchase three new heavy duty wheelbarrows to help mark our diamond jubilee year. These new barrows will replace those at Pippenhall allotments which have clearly seen better days after many years of sterling service. The new wheelbarrows are now available for use by plotholders and a big thank you is due to to David Middleton who transported them to Pippenhall in his car.

Due to the success of the societies fund raising activities this year it was also agreed to investigate the acquisition of a heavy duty petrol brush cutter/strimmer in 2013 to assist with general site maintenance and to make available for hire to those plotholders who need to clear an overgrown area or plot at Pippenhall. More news on this later. We are also going to look into environmentally friendly lighting options for the Pippenhall shop, which will be of particular benefit during the winter months and make the shop a more welcoming environment.

Don't forget that the society already own a heavy duty petrol cultivator that can be hired on a Sunday morning during shop opening hours (9 to 12) for a modest fee.

The allotment shop at Pippenhall is now closed for the winter break. It will re-open on February 6th 2022 when the opening hours will be 10am to midday.

Please could all tenants make sure the gate is always shut fully after entering or exiting the site and not to let anyone on site who does not have a key for the gate. There have been a number of instances of theft and sheds being broken into in recent weeks and we would ask tenants to report any suspicious activity to both the police and Greenwich council parks and open spaces department.

One of our members has experimented with growing potatoes in bags over the last two years. Read about his experience and advice to other container growers here

One of the tenants at Pippenhall has recently started a Pippenhall allotment blog. Have a look for yourself and register if you would like to contribute to this community. Click here to visit the blog

(please do not use this address for correspondence)